Last night we had a great time at the Oak Ridge Boys concert held at The Mansion in Branson, MO.  Hubby and I both commented that we can only hope to have as much energy as they do when we are their age! 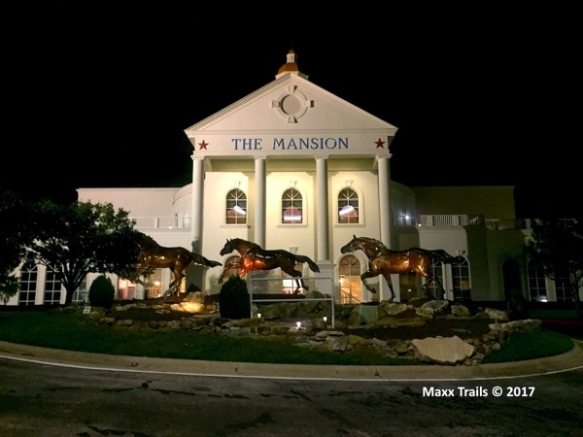 Not bad pictures for my cell phone! 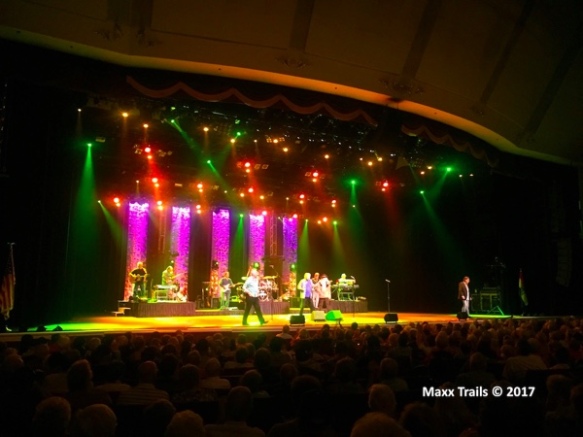 We enjoyed our time in Branson and wish we had more time to hit sights that some of my readers have suggested, but Albuquerque is beckoning and we have a few other places we want to stop along the way. I received a great comment from ecrab1957 who lives in Branson, which you should really go back and read … he provided some great history of the area! Thanks for that comment ecrab1957, I sense a traveller and blogger in your future 🙂

It was a nice drive today with something other than cornfields to look at. 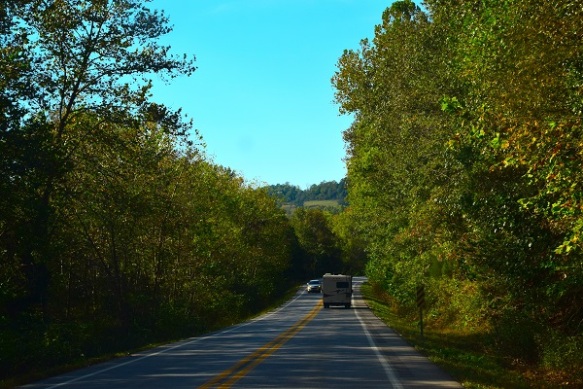 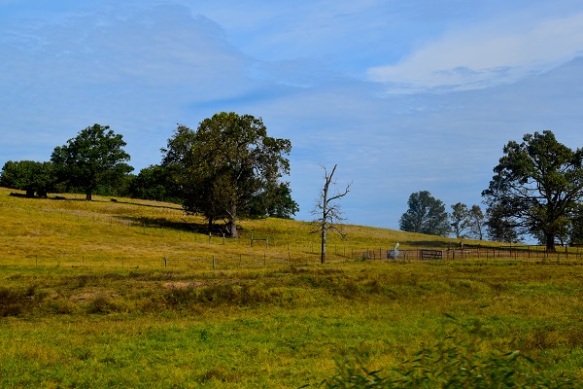 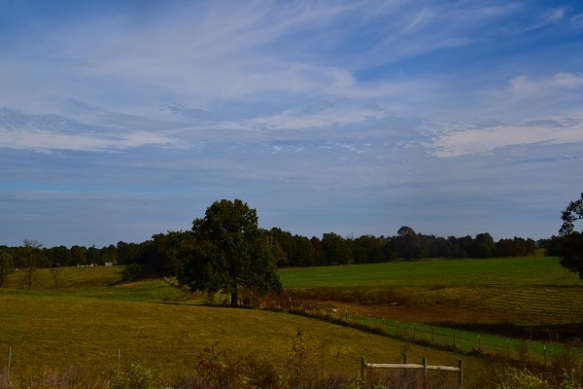 Once again the jello wiggled and we gave up our plans to spend the night in Fort Smith, AK. When we checked in at customer service in the local Walmart we weren’t getting the friendly Walmart vibe, so we made a quick stop at Sam’s Club for groceries and hit the road.  Another factor was the temperature, at 88F/31C it was going to be to hot without air-conditioning, plus I have a date with Blake Shelton in Tishomingo, OK 🙂  Well to be fair I don’t have an actual date but I have been telling hubby all along that I’m sure when Blake hears we are in town he will want to have us out to his ranch.

Last night we went to Dolly Parton’s Dixie Stampede and although it wasn’t entirely what we expected, we did enjoy ourselves. We thought there would be more singing, and at least some of those songs would be Dolly’s songs. It turned out to be a dinner show (where you eat with your hands) with thirty-two horses and riders and some fun competition between each side of the arena. 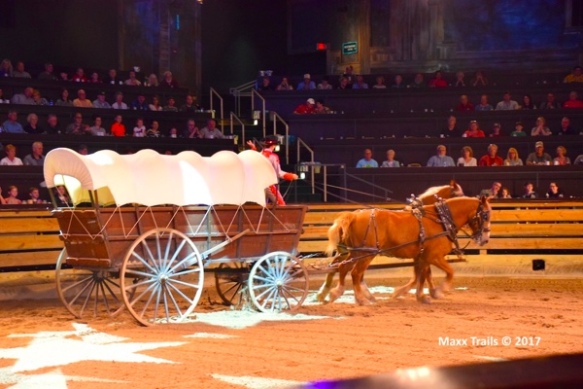 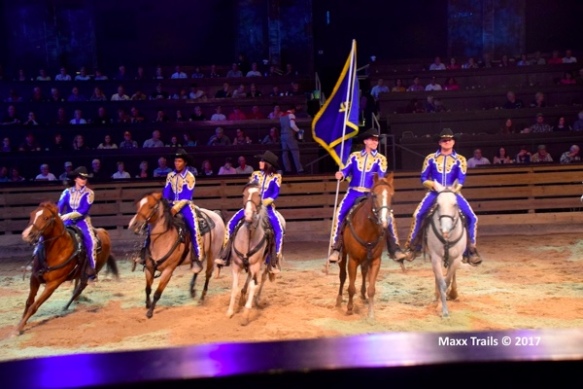 The rain let up today so we were able to get out and walk around and I have to say Branson isn’t really a walking town. The sidewalks are so narrow, rough, and sloped that you really don’t feel safe walking along the main road, Hwy 76, where traffic is flying by. 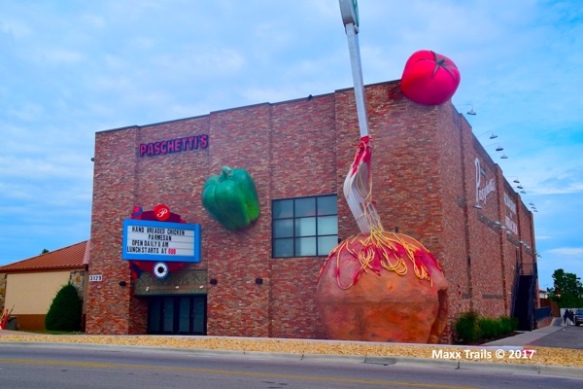 This looked like an interesting place to eat but we didn’t try it out.

We did walk down to the Half Price ticket booth and pick up tickets for the Oakridge Boys tonight. It turned out the tickets weren’t any cheaper than what we would have paid if we had purchased them at our RV Park but we did get a coupon book and discount card so it was worth the walk. They would have been cheaper, i.e. free, if we were willing to sit through a time-share presentation but life is to short for that! 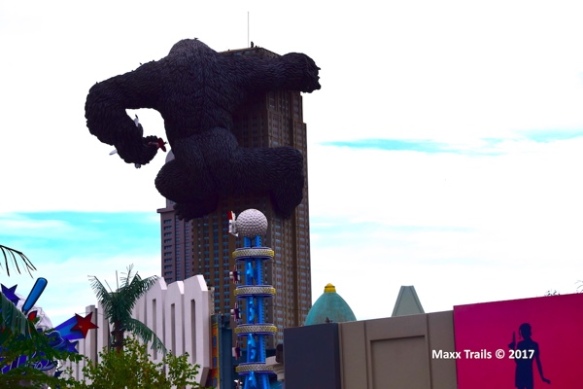 Hey sis the goddams are out in Branson! 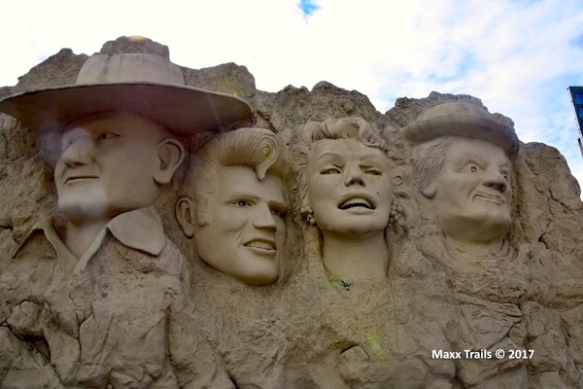 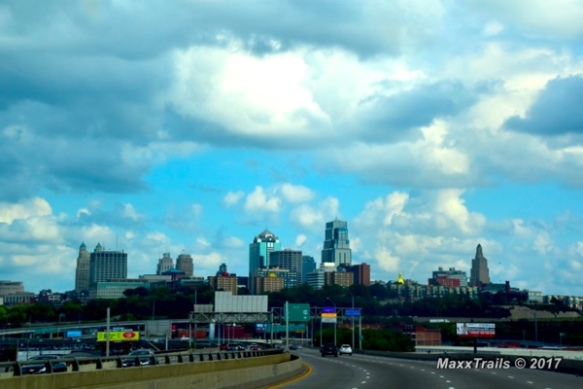 Downtown Kansas … so in Missouri 🙂 And I took this picture yesterday, today’s weather wasn’t so nice!

As often happens when we decided to add a city to our list of travels it is because we watched something on TV or read about it in a book. That is how Branson, MO was added to our route last week. We were watching The Voice and one of the contestants was from Branson, both hubby and I looked at each other and said “We need to go to Branson”! And today was the day. 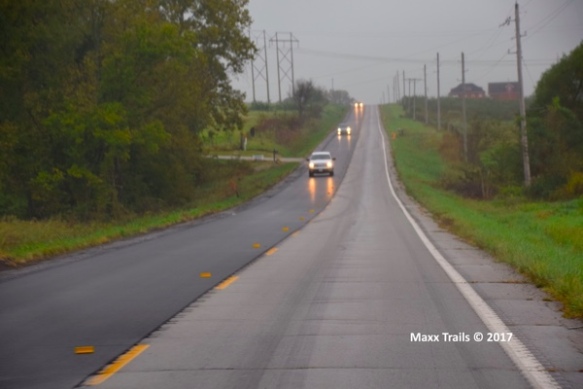 Our trip today started out on roads like this, such a nice change from the interstates 🙂 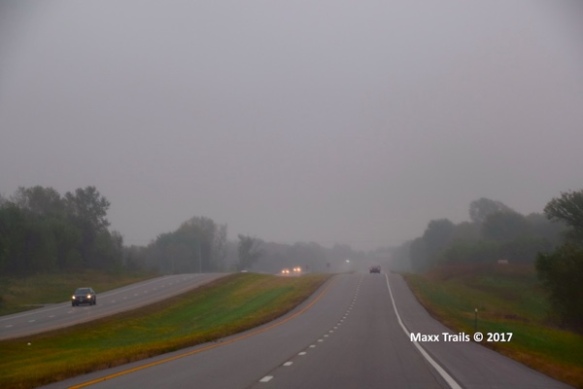 Once we turned onto Hwy 13 we had smooth divided highway with very pretty scenery … even through the rain. 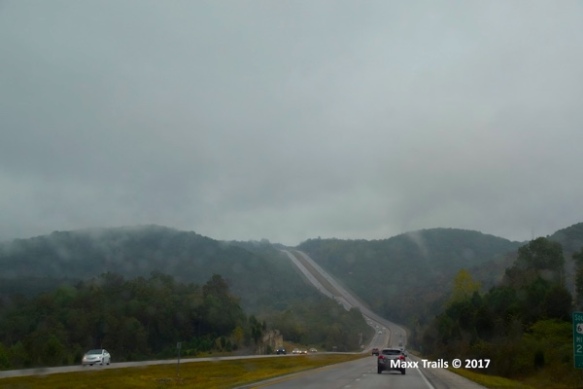 The drive along Hwy 65 into Branson would have been very pretty if it wasn’t for the rain, I got this picture just before the downpour!

We arrived at Musicland Kampground, with no reservations, right around noon and we were able to snag a really nice site with full hook-up (it is still hot and muggy so air-conditioning is a must!). 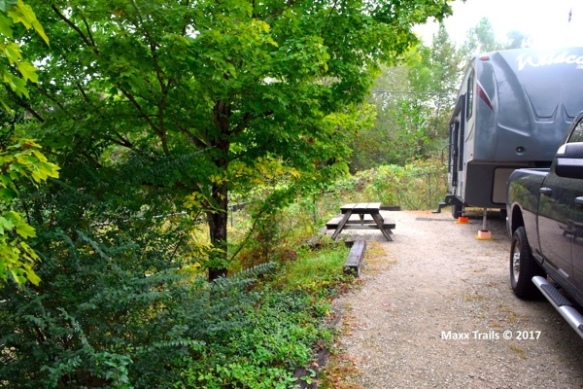 Despite the rainy weather we spent the afternoon and evening taking in the sites of Branson, but since I have burdened you with long blogs lately I will give you a break and call this blog done 🙂  But rest up, I’m sure tomorrow’s blog with be a long one!

Those are the only words I can come up with to describe the incredible weather event we witnessed in Kearney, Nebraska last night!

Yesterday was one of those days, temps around 30C/86F, beautiful blue sky, and strong warm winds. At home that immediately brings to mind the threat of forest fire and I commented more than once to hubby that the weather just didn’t feel good.

Shortly after 8:00 p.m. the lightening started and it never stopped, just one strike after another. It looked like a fireworks show that went on for just over an hour, where every firework set off was a clear color and continued with one or two flashes every second. The sky never went dark! We could hear the rumbles of thunder in the distance but it was the lightening that was just amazing.  Along with lightening we had a torrential downpour (I can now see how flash floods happen, the Walmart parking lot was flooded!) and heavy, heavy winds. 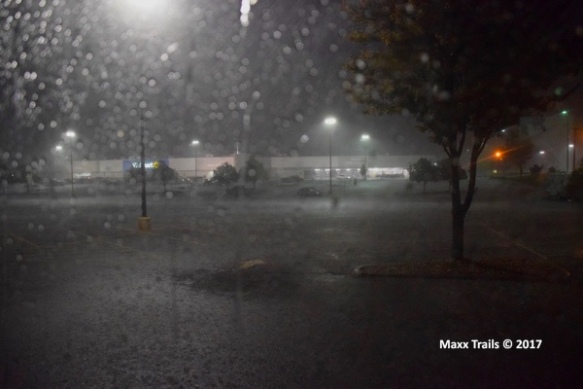 This picture doesn’t do the storm justice but I wasn’t going outside to try and get a better one … and I definitely wasn’t standing outside in a thunderstorm trying to get that perfect shot of a lightning strike!

Once the rain and wind died down the lightening slowed down but it still kept coming, one strike after another … and then the thunder finally started sounding like thunder. Big crashing thunder and bright jagged lightening strikes that continued well into the night. I hesitated to even write about the storm in my blog because there is just no way I can convey the intensity or magnitude of it, but I wanted the memory for hubby and I when we looked back. This is a storm that will go into the memory bank with the typhoon that came in the night we tried to fly home from Nagoya, Japan. 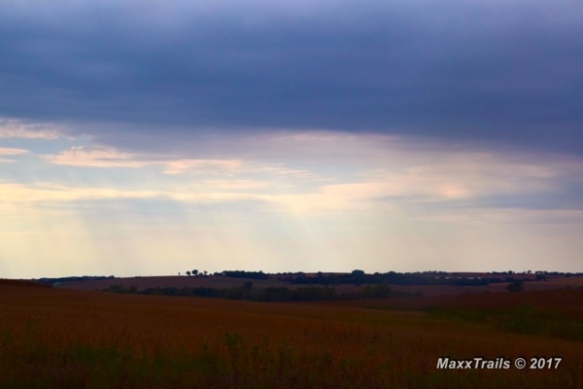 It was very dark this morning when we hit the road at 8:30.

Our plan today was to spend the night in Omaha, NE, but a few days ago we decided to add another stop to this jog and we wanted an extra day there. That led us to make the decision to drive a little longer today and spend the night in Des Moines, IA. But as often happens with jello solid plans, the jello wiggled 🙂  As we were entering Lincoln, NE I opened up our map book to mark off where we had travelled and I noticed that it would save a lot of miles and time if we bypassed Des Moines and headed straight to Kansas City. Both Omaha and Des Moines were Walmart stops so we weren’t going to miss anything and now we have saved some time, money on fuel, and turned off the interstate onto secondary roads, you can’t go wrong with that! 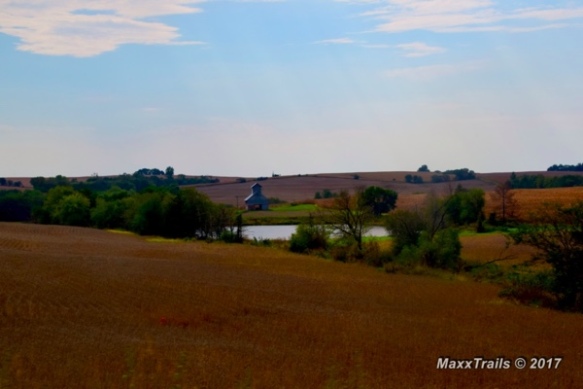 I thought Iowa was the corn state but all we saw in Nebraska was field after field of corn. 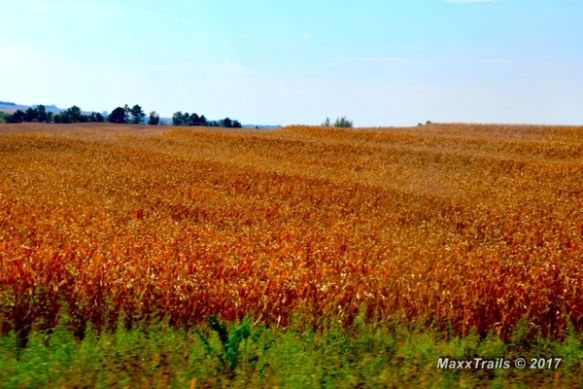 We crossed the Missouri River just before we crossed into Iowa. I’m not sure why this was so exciting but hubby was pleased he had seen it 🙂 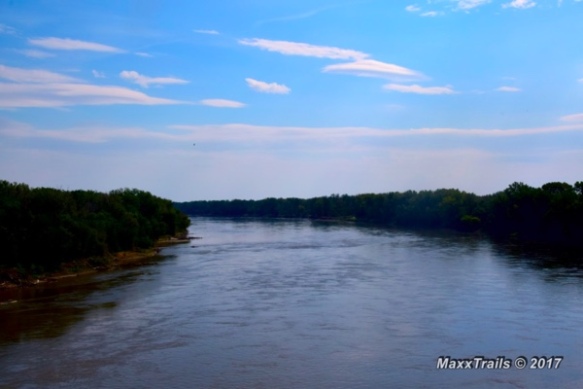 Ok wait, Iowa is the corn state, it is also field after field of corn. Hubby was really surprised that none of the corn had been harvested so I finally gave in and looked it up on the internet … and of course he was right both Nebraska and Iowa are behind on their corn harvesting. 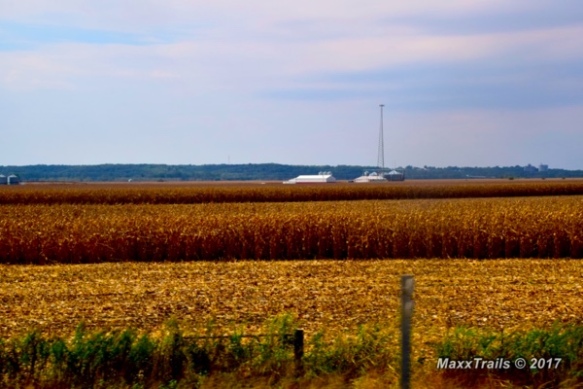 As it turns out Missouri is also a corn state, and we are having corn for dinner 🙂 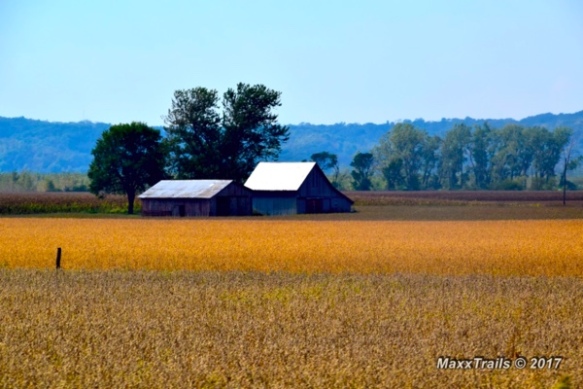 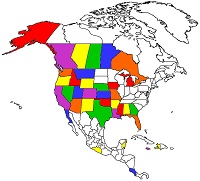 All text, pictures, and material in this blog are copyrighted. If you wish to use any content please credit and include a link to Maxx Trails. Don’t hesitate to contact me if you have any questions.