A look out the bedroom window this morning showed grey skies and light rain, along with some wind so we dressed warmed … and then I opened the door of Maxx and we were hit with a very warm wind!  So back inside to change clothes, still jeans, but short sleeve T-shirts and flip-flops:-)

We headed down to Dauphin Island, which is at the mouth of Mobile Bay where it joins the Gulf of Mexico.  Once again we crossed a long bridge, but I won’t bore you with it’s history today:-)  One thing that we have noticed about all the bridges is how quickly they rise in the middle and then just as quickly drop down on the other side … there are no gradual rises like we have at home.

Bridge over to Dauphin Island … note steep rise in the middle! 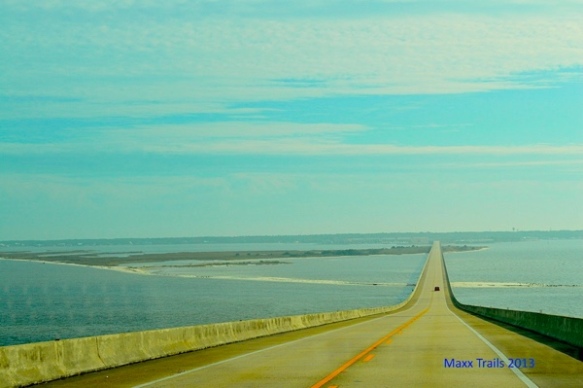 Sharp drop on other side of bridge to Dauphin Island

The west end of the island has a road down the middle and homes on the north side along Mobile Bay and homes on the south side along the Gulf of Mexico.  All the homes are built on stilts and surround by white sand beaches and sand dunes.  The wind blows the sand over the access roads in such volume that the roads need to be plowed in order to keep them clear.  At quick glance made us think it was piles of snow!

Homes on the Gulf of Mexico 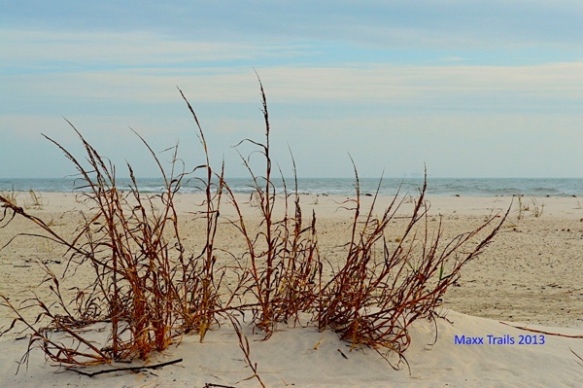 The east end of the island ends at the Mobile Bay Ferry which we took across the mouth of the bay to Fort Morgan, a 40 minute ride for $20.50 for the truck, driver, and one passenger.  There are many oil rigs in Mobile Bay and it was interesting to see them up close.

Up close with an oil rig 🙂

After disembarking the ferry we drove up the other side of the bay through very picturesque communities, a great round trip drive that we highly recommend.  I really like southern Alabama!