Even though it was Friday the 13th and we thought it might be safer to stay put it was time to move on to Mobile, Alabama.  Heading out of New Orleans on I-10 East we saw overpasses and entrance/exit ramps that had been damaged in Hurricane Katrina and where now closed to traffic.  Our travels also took us over the Twin Spans Bridge at the east end of Lake Pontchartrain.  This bridge was recently rebuilt as the old bridge was severely damaged in Hurricane Katrina and had to be demolished.  The bridge is three lanes wide on each span and is 5.4 miles long.  Despite what you might think from my posts I’m not really a big bridge history buff but hubby kinda of is and its my job to search Google for the answers to all his questions so I feel it is only fair that you should also have a history lesson:-)

We stopped at a rest stop in Mississippi and the visitor info booth was just what I expected, a southern home all decorated for Christmas inside and Christmas music playing.  I really wish I could have taken some pictures but the camera battery was dead.  In Mississippi the boots came off and the flip flops went back on!  We are still wearing jeans and sweaters but it is warming up.  Unfortunately along with the flip flops I had to put the robo boot back on because my foot is pretty sore and swollen from all the walking yesterday in New Orleans:-(

After we set up at the RV Park in Mobile, Alabama we took a drive out to Point Clear and Fairhope on the other side of Mobile Bay.  It was dark by the time we arrived so we could see all the Christmas lights and they were very pretty.  The City of Fairhope has done a really nice job of lighting the trees along their main streets and the planters along the sidewalks have poinsettias in them!  Who would believe you can plant poinsettias outside! 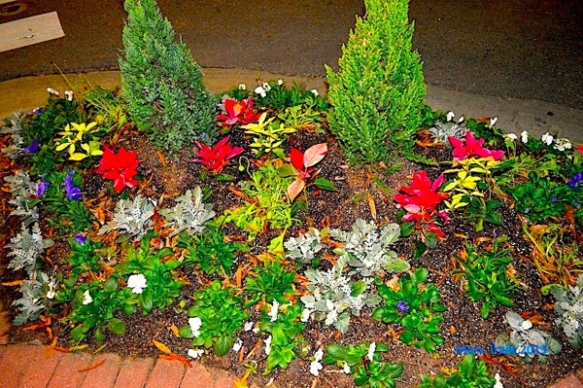 Poinsettias in the sidewalk planters! 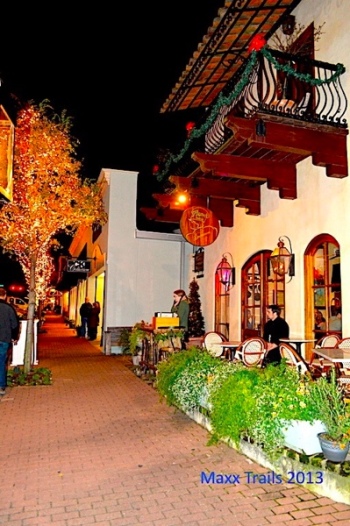 We decided to have dinner in Fairhope because it was such a pretty town.  We found an Italian restaurant that looked nice so in we went.  The restaurant is made up of the main building, which was full when we arrived, and several small rooms surrounded by a patio with tables.  Since it was a little to chilly to sit outside we were seated in one of the small rooms.  When we first arrived we were on our own but the room quickly filled up.  The atmosphere was great and the food was also good.  All in all not a bad day for Friday the 13th! 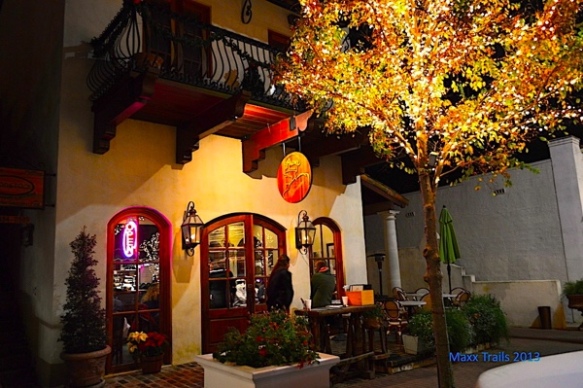 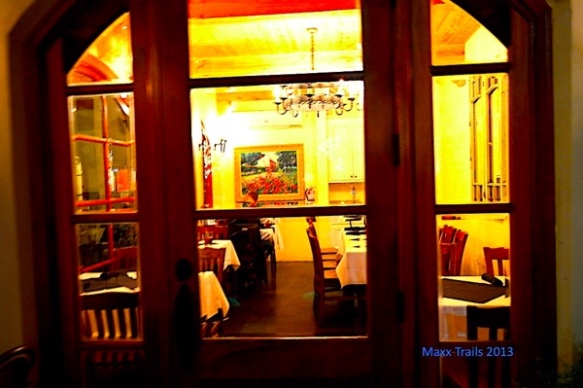 Can you see hubby at our table?

Tomorrow we are going to drive out to Daphne Island on the Gulf of Mexico and hopefully get some good pictures:-)